Stelios Velkopoulos has completed Kinesiotherapy and specializes in massage.

He has attended many seminars in Greece:

Apart from Greece, he has also attended seminars in Thailand and in India.

He attended 6 schools in Thailand, took the teacher’s diploma in Thai massage,  1-2 level degrees  in Reiki, Thai Reflexology, Spa treatments and learned to use Thai on a table and in conjunction with the nervous system.

In India he went to three schools in three different places and learned to do Ayurvedic massage, Ayurvedic treatments, massage on foot, and is able to teach Yoga to beginners.

He has been working professionally since 2001 and his experience is great due to his many collaborations. He has worked in Physical Therapies, Beauty Institutes, Gymnasiums, has worked with professional soccer teams, with National Weightlifting for two years, Massages Weightlifting, Classic, Sport, Boxing, Tennis  athletes, artists, people working for the television  and various  individuals.

He also works as a volunteer by being a member of a team called Δ.Ε.Κ.Α ( Volunteers’ Network of Social Aesthetics ) For the last five years he has been working in the Psychiatric Department of ΣΩΤΗΡΙΑ ( Public Hospital ) , ιn ΔΡΟΜΟΚΑΪΤΕΙΟ ( Public Mental Clinic ), in the Public Nursing Home of Athens and in Glyfada’s Nursing Home, called ΦΡΟΝΤΙΔΑ.

By practicing therapeutic touch, he has been helping mentally ill people as well as senior citizens with their need to relax, get rid of excessive stress and come to terms with themselves.
Δ.Ε.Κ.Α in collaboration with qualified therapists of the Institutions mentioned above led to the publication of a book dealing with the topic Research on the field has indicated the healing effects of therapeutic touch on the people who have experienced it. 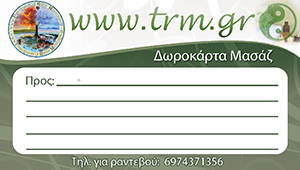 Give a special and unforgettable gift to your loved ones!

Fill in your details and I will contact you for sending the Gift Card.

At a time when demands and stress peak in the workplace and reduce productivity, reward your colleagues as an appreciation of their efforts by giving them a massage in their workplace!

Fill in the form and I will contact you.